The newest tree in the Georgia State Botanical Garden needs neither water nor sun. Its 75 flowers are made of kaolin and soft porcelain. They carry images of Danish plants, meticulously reproduced from folio-sized illustrations drawn in the late 1700s and early 1800s.

The Tree of Life is on a wall in the main gallery of the Porcelain and Decorative Arts Museum.

The building houses more than 1,000 pieces of porcelain and botanical art, including drawings, paintings and bound books of illustrations of the flora of Denmark, donated by Deen Day Sanders, a long-time supporter of the National Botanic Garden .

“What we’re doing is different from how typical art museums would approach displaying these items,” Jenny Cruse-Sanders said. MS ’97, PhD ’03, director of the Georgia State Botanical Garden. “We present these elements in the context of natural history, biology and nature. The idea is therefore to highlight what we can learn about our world by observing these decorative arts.

The museum, which is part of the new Center for Art and Nature, will enable garden staff to further expand the possibilities for educational, cultural enrichment, research and experiential learning for faculty and students, centered on the relationship between art and the natural world.

The State Botanical Garden, a public service and outreach unit of the UGA, was established over 50 years ago as a living laboratory to support science education. The garden is a place of discovery, providing resources to professors and students but also to members of the public who visit from near and far.

Deen Day Sanders has served as president of the Garden Club of Georgia and president of the National Garden Clubs. The Museum of Porcelain and Decorative Arts holds important objects from its collection, and she is the only donor to finance its creation.

The gardens appear to cascade past the windows of the museum gallery where Dorothy Doughty’s birds are displayed, one of Doughty’s largest collections of birds on display to the public. Displaying porcelain in a botanical garden is as natural as displaying antique tea roses. Throughout the new museum there are countless examples of porcelain inspired by botanical exploration and scientific studies in botanical gardens and natural settings.

Flora Danica, an encyclopedic study of the original flora of Denmark, has led to more than a century of research documenting the history of the flora, accompanied by detailed scientific drawings of each plant. In the late 1700s, the Prince of Denmark commissioned a porcelain collection that reflected the detailed illustrations, some now displayed on the Tree of Life.

“These pieces weren’t necessarily designed to look good, they were meant to spark conversations,” said Cruse-Sanders. “First created in the Age of Enlightenment, the highest art form was these meticulous reproductions of discoveries made in nature.”

“If you know anything about me you’ll know very quickly why it means so much to me,” Sanders said. “The iris is my favorite flower and I love butterflies.”

As an apprentice florist at the Royal Worcester porcelain studio, Lewis focused on the delicate clay flowers – colorful roses, irises, orchids, wildflowers, which would become the studios’ most popular series, a collection of birds Americans. Lewis studied under Dorothy Doughty, whose birds were highly collectable.

Lewis then established Connoisseur of Malvern, a porcelain factory in England, which was active until the late 1900s.

More than 50 Lewis sculptures, including the Deen Day Iris, Deen Day Lily and Deen Day Camellia, are on display in the museum.

“I saw him in Waterford,” Sanders said. “Then I started to see his work here in the US and started my collection. “

Highlighting the influential work of another female artist, Sanders points to a master’s plate made in China, circa 1735-1740, using cobalt blue underglazed on white porcelain with gilding around the edges. The iris and butterfly design in this piece is based on scientific illustrations by Maria Sibylle Merian, a German-born naturalist and artist in the late 1600s and early 1700s.

Although his works are watercolors or engravings, many were used as models for designs on porcelain dishes, vases, tea seats, etc., some even on porcelain pieces from Meissen, Germany, where the first European porcelain factory was started in 1710..

At the time of the founding of the Meissen manufactory, Europeans were fascinated by Chinese porcelain. It was pure white and exceeded the quality of any other porcelain in the world.

The Germans were determined to create their own porcelain from Saxon clays, using the business skills of miners and smelters. But they couldn’t make white ceramic from red clay, so they replaced kaolin, a chalky white substance that was mined locally.

Kaolin is native to Georgia, mined near Sandersville (known locally as the Kaolin Capital of the World) and exported to the United States and around the world for use in cosmetics and medicines, as a paper coating, and in the manufacture of porcelain and pottery. 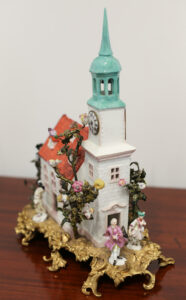 One of Sanders’ favorite pieces, a church (right) from the Meissen porcelain factory in Germany, is on display at the museum. Considered one of the few in the world, he served for years in the Sanders’ Cashiers, North Carolina home, a symbol of his Christianity.

“This church is very dear to me because of my faith,” said Sanders. “You don’t get anything on your own. If someone helps you along the way, you need to give back. If it has been given to you, you must share it.

His interest in flowers and porcelain began in his childhood.

“I had a porcelain teapot and cups that an uncle, who was in the Navy, brought me from China,” she said. “I loved playing with my little dolls. I have always liked pretty, delicate things. So when I got married I started collecting different porcelain pieces that I thought were pretty and when I could afford to have some serious buying interest I did and started collectible fine and rare porcelain.

This church is very dear to me because of my faith. You don’t get anything on your own. If someone helps you along the way, you need to give back. If it has been given to you, you must share it. – Deen Day Sanders, the sole donor supporting the establishment of the Porcelain and Decorative Arts Museum at the Georgia State Botanical Garden

She found many pieces during her travels, or at auctions. Virginia White, interior designer for Sanders, found some in antique stores and ordered more on behalf of Sanders. Sanders’ husband Jim commissioned Diane Lewis to create Deen’s Iris as a Christmas present for his wife in 2019.

“The State Botanical Garden is absolutely the most natural place in the world to display the porcelain and decorative arts that Deen has collected over the years because they reflect his interests,” said Cruse-Sanders. “And Deen has always had a passion for botanical gardens, flowers, butterflies and the beauty she sees in nature.

One of its main exhibits is a collection of serving sets for coffee, tea and chocolate. These are all produced from plants all over the world which had to be cultivated, propagated, produced and served. The museum tells these stories and many more about the connection between plants and the decorative arts.

“I want nature to be interpreted in words and as an example in this museum,” Sanders said. “I want visitors to know that there is a botanical component to everything you do. I believe that art captures and imitates nature. With this museum, we will be able to demonstrate this correlation. 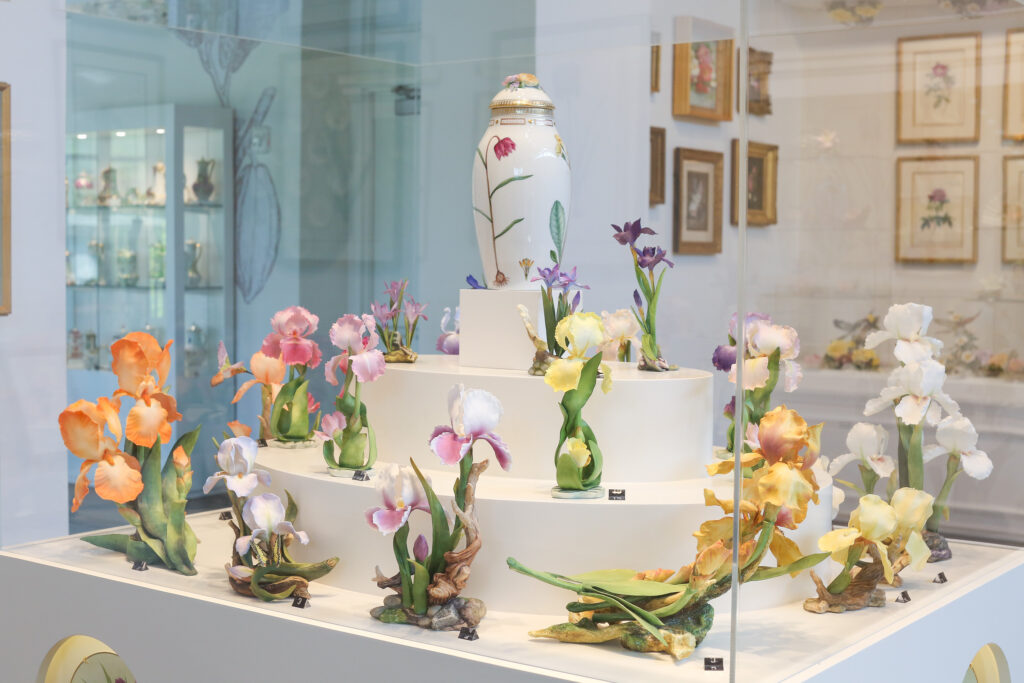