When printmaker Sylvia Roth moved into her South Nyack home in 1977, she had no idea it was the birthplace of a major figure in American art, Joseph Cornell. This house on Avenue Piermont seems to have its own designs, selecting artistic occupants for more than a century.

Emily Dickinson, timeless muse of Cornell, wrote that “nature is a haunted house, but art is a house that tries to be haunted”. As Roth describes the creative output of later generations of his family, one begins to suspect that this is a house haunted by art.

Joseph Cornell lived at home in his early childhood. His father, Joseph, was an affluent designer and his mother, Helen TenBroeck Storms Cornell, was a kindergarten teacher. He had 2 sisters, Elizabeth and Helen and a brother, Robert.

When her father died in 1917, Cornell’s family moved to Queens, NY. He lived most of his life in a small frame house on Utopia Parkway with his mother and brother Robert. Cornell devoted much of his life to caring for Robert, who had cerebral palsy. Cornell became a recluse and aside from a few years at Philips Academy in Andover, Massachusetts, he never left the New York metropolitan area.

His artwork, however, has become internationally recognized, collected and exhibited.

According to artist and writer Lee Mamunes, a former professor at the Edward Hopper House Art Center, “Cornell was a true eccentric and completely self-taught. He was neither a sculptor nor a painter. He was a collector. In his late twenties, he began to piece together fragments of daily life, including memories of his happy childhood in Nyack, placing them in glazed shadow boxes resembling tiny stage sets.

Here’s how Pultizer Prize-winning poet John Ashberry described Cornell: “Cornell’s genius is that he sees and allows us to see with the eyes of childhood, before our vision is clouded by experience. , when objects like a rubber ball or a pocket mirror seem charged with meaning, and a marble rolling on a wooden floor could be as prodigious as a passing comet.

Here is my conversation from 2014 with the current resident of the my art haunted house, Sylvia Roth

So you really didn’t know Joseph Cornell lived here before you moved in?

I did not do it. I was a Cornell fan. I had a poster here from a gallery that I had purchased. It was a beautiful blue and white collage with a French title. I had hung it on the kitchen doorway. Then one day there was a knock on the door. It was Alan Gussow.

Gussow was devoted to the arts community in Rockland County. Nervously he told us this was Joseph Cornell’s childhood home. He didn’t think anyone living inside would care to find out.

He showed us a photo of Joseph and his sister from 1908.

Alan said people wanted to put a plaque on the house, and we said we wanted to throw a party.

My daughter, Susan Roth-Beerman, was 17 when the party was held in honor of Cornell. Mayor Cross came, as did Cornell’s sister, Elizabeth, who was pictured.

Michael Minard and Frankie D, who lived here at the time, performed a song on Cornell. It was then that the plate was installed.

I understand that you are also an artist. What kind of art do you do?

For many years I was an engraver. I had my own studio, Hudson River Editions. I had been doing my own art, prints and paintings, since I was 10 years old.

My mother, Faye, painted. As an immigrant, she never had the chance to get an art education. But she liked to paint flowers and birds.

I went to the Natural History Museum and drew the dioramas. My librarian at PS87, Aaron Suskind, encouraged me. He always praised the holiday decorations I made in 7th grade. He said I should go to music and art. I passed the test and entered. That was all.

After music and art, I studied at NYU with Philip Guston. I then worked at the Museum of Modern Art, as an assistant to Priscilla Porter, the potter.

After graduating from NYU, I married Henry H. Roth and we had a son, SJ. In 1959 we moved to New City and had twin daughters, Susie and Anna Hayes. At that time, I was doing character design. I also did covers for the magazine, Africa today.

My engraving started in Rockland County. I studied with Roberto Delamonica at the Rockland Center for the Arts. I then became his assistant. Wherever he taught, he took me. We worked together at ROCA and the Art Students’ League. When he left his position at the New School for a while, I replaced him.

The art world became aware of my work through local artists here in Rockland like Steven Green and Annie Poor, daughter of Henry Varnum Poor. One day, at an opening at the Museum of Modern Art, Knox Martin leaned over the table and said, “Sylvia, I’ve been thinking of you. You work with great artists and you should make your own publication and earn money. You are truly a master printer. You should start your own print studio. I borrowed money from my brother, ordered a press and started Hudson River Editions. It was in 1981. 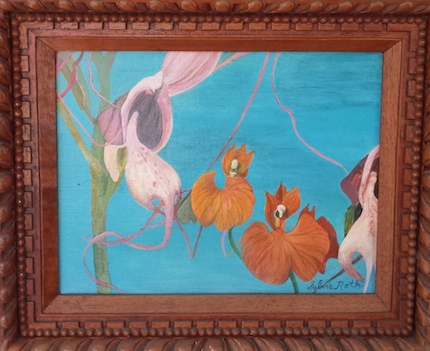 I am now a member of the Chelsea Art Group. After a heart attack in 2002, I stopped engraving and started working as an artistic consultant. Don Christensen taught me all about the business of art and now I work with him. Don is the chairman of the Chelsea Art Group. We educate our clients, help them build art collections and find great art to live with. OWe also organize visits to museums and galleries and take our clients to art fairs.

Other artists in the family?

My daughter Susie is a grief therapist and counselor at United Hospice of Rockland and also has a private practice. And she still makes art. She studied with one of the founders of the New York School of Painting, Richard Pousette-Dart. She was studying at ROCA the year Cornell knocked on the door.

Susan’s twin, Anna Hays, is a writer. And my son SJ is a screenwriter.

Susie met her ex-husband, John Beerman, in Skowhegan, an artists’ colony in Maine. He is a well-known landscaper.

My granddaughter Hannah Faye is in Bard. She will make painting her life. She studied this summer at the Studio School in the Village, with her teacher from Bard, Joe Santore. (Note 2021: Hannah is hosting a solo exhibition of her work this summer in Philadelphia)

Susie’s son, Joey, is a musician and plays bass at the SUNY Purchase Conservatory. His first teacher was Rob Stoner from West Nyack. He then began the double bass at the Lagond music school in Elmsford. Charlie Lagond performed with King Creole and the Coconuts.

Now tell me about the second knock on the door.

A woman was in town for her 37th Nyack High School reunion and wanted to visit the house where she grew up. She wanted to see the backyard where she also got married. It was then that we learned that Ralph Pearson (her father) had lived here and that was just the start of the coincidences. 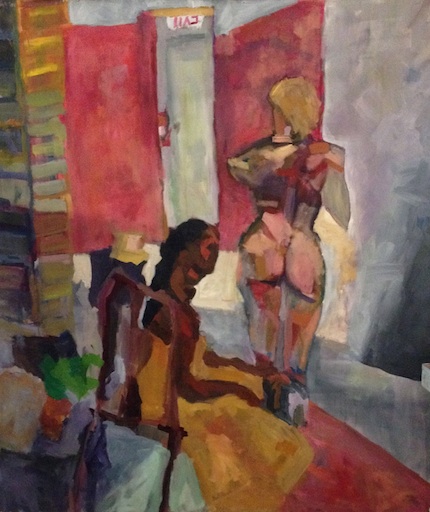 Ralph Pearson was a well-known engraver, who wrote the book How to look at modern pictures. Pearson was so determined to make art accessible that he became a printmaker.

As we walked around the house with her, she designated a room as where he was doing his engraving. I had just had the floor of this same room reinforced to install a 2000-pound engraving press.

She then asked to go upstairs to see what she called the apricot room. My daughter and I were surprised. I had just painted this room in apricot. We had no idea that one room had been a printing press and the other painted apricot. 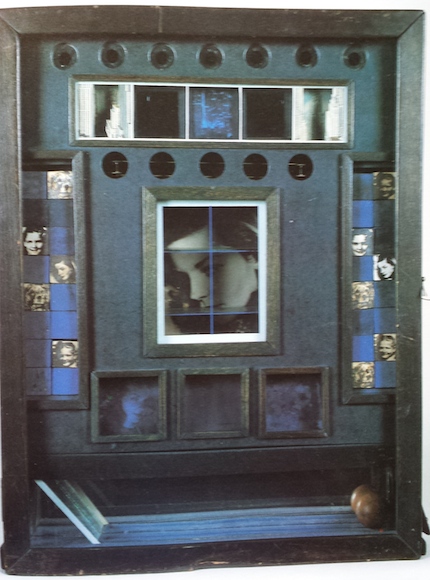 We read a lot about Cornell. He experienced a lot of alienation and isolation in his life, but his memories of his childhood in Nyack were pleasant and peaceful.

There is a picture of him with his disabled brother in front of this house. He was devoted to his brother and would incorporate his brother’s designs into some of his works.

But my favorite pieces are the ones with movie stars from the 30s and 40s.

Sylvia Roth is a master printer and has collaborated with world renowned artists including John Chamberlain, April Gornick, Alfonso Ossorio and Karen Finley. Works produced from his press, Hudson River Editions are in many collections, including those of the Metropolitan Museum of Art, the Whitney Museum, the Smithsonian Institute, and the Brooklyn Museum. Roth’s own paintings and prints have been exhibited in galleries in his native New York and across the country, including Los Angeles, Minneapolis and Boston.

Special thanks at Lee Mamunes for presenting some of the facts which I incorporated into my sketchbook in his excellent article for the latest Nyack Historical Society newsletter, “Joseph Cornell and Emily Dickinson: Kindred Spirits”.